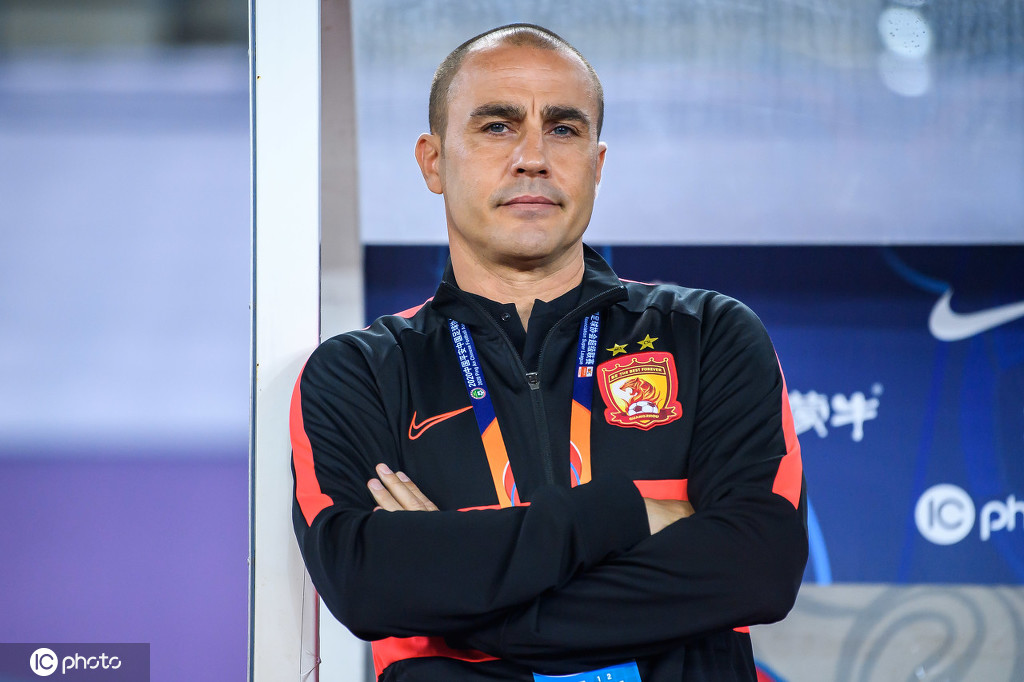 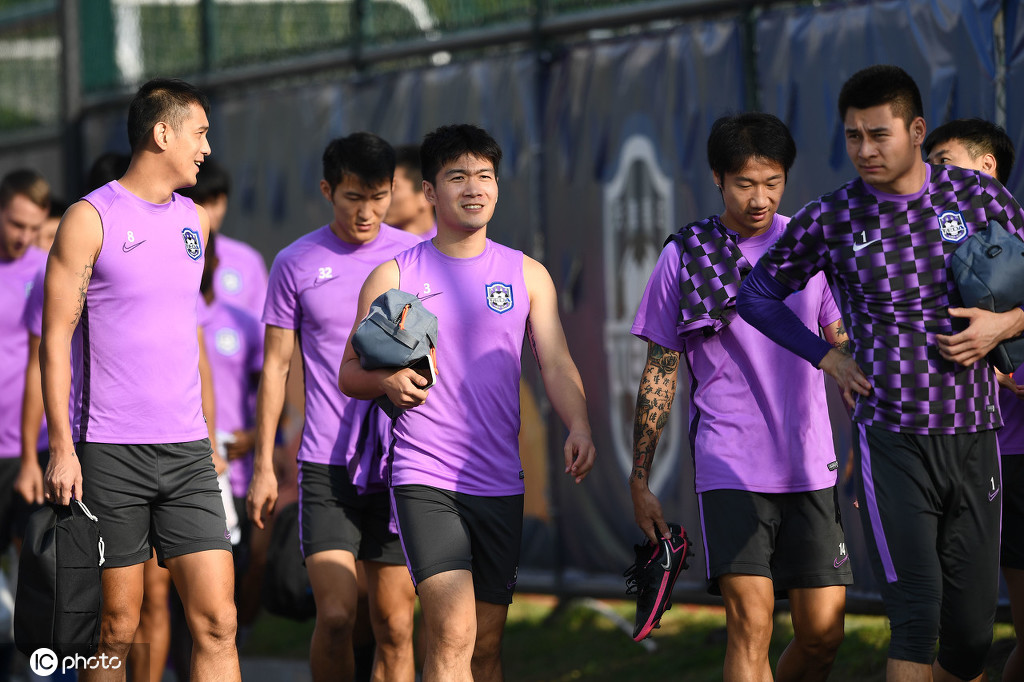 Guangzhou Evergrande Taobao Club has not announced the team concentration time and the next plan, but Evergrande will conduct a public training session on October 8th, and the news media will be available to watch.

On October 7th, the Beijing Zhonghe Guoan first team ended their vacation. All the players except the five internationals regrouped to prepare for the second stage of the season. Different from the previous training on the first day of leave, today’s training session coaching staff arranged very rich content and the training intensity was very high. According to the coaching staff's plan, the next two days of training will still maintain a relatively high intensity to help players make good physical reserves. On the 10th, all international footballers will return to the team. At that time, the team will also begin formal tactical training, make a meticulous combat plan for the first opponent in the second stage, and make every effort to fight the second stage of the game. According to the arrangement, the Guoan team will be training for a few days in Beijing for a short period of time and is expected to leave for Suzhou on the 11th.

On the morning of October 5th, after the six-day holiday, the Shanghai SIPG team regrouped at the Century Park training base and entered the rhythm of preparing for the second stage of the Super League this season. Head coach Pereira said, "We are now starting normal preparations for the two games in the first round of the second phase. The team’s first opponent is Shenhua. We will study them carefully. The next training will also It will focus on the characteristics of the opponents and conduct targeted drills in technical and tactical. The important thing is that the holidays allow everyone to have enough time to rest. The players and their families can reunite and relax mentally. Next, we must prepare well. "

The Jiangsu Suning Tesco team closed on October 4th. Except for Wu Xi and Li Ang who went to the national team, everyone got together to start a comprehensive training and preparation for the second stage of the championship competition.

The Shandong Luneng team regrouped at noon on October 5th and the team will resume training in the afternoon. However, the five nationals in the team, Hao Junmin, Liu Binbin, Guo Tianyu, Wu Xinghan, and Jin Jingdao, will return to the team due to their participation in the new national football training session in Shanghai. At present, Hao Wei has taken over the team in an all-round way, and the team will go to Suzhou on October 12 with a high probability. It is reported that Shandong Luneng will have a warm-up match with Tianjin TEDA in the near future, but the specific match time has not yet been determined.

After the 72-day closed game in the first stage of the Suzhou Division, after a short vacation to enjoy the warmth of the family, Zall soldiers regrouped at the club training base on October 5th, under the guidance of the coaching team leader Ma Yongkang, The team will fully prepare for the second stage of the Super League. Except for the three players who participated in the national team training, the other players have returned to the team. Li Xing, Baptistang, Carrizo and other players gave up their vacation and returned to the base for treatment and recovery on October 1st, striving to devote themselves to the next game in the best physical condition.

It was concentrated on October 1st, and training began on the 2nd. TEDA’s vacation was the shortest among the Chinese Super League teams. The poor performance in the first stage made the TEDA club aware of the urgency of time. Before the relegation battle begins, we must hurry up and do a good job. All preparations must be "stupid bird flying first."

On October 3, the Havel team that ended the isolation formally joined the Jianye Football Club and began coaching. Welcome to the head coach Javier (Spain), assistant coach Augustine (Spain), athletic performance coach Marco (Italy), and analyst Alexander (Spain) to officially join Jianye Football Club. Javier said: "Jianye is a great football club. The performance in the first stage did not fully demonstrate the strength of the team, so we have to use hard work to complete the rebound and surpass!" Looking forward to Jianye team in Javier team Under the leadership of, in the second stage of the Super League, it showed a new look and wonderful performance!

After a short holiday break, the first team of the Dalian Club regrouped on October 4 to prepare for the second stage of the Super League. Except for Hamsik who returned to participate in the national team competition and Tong Lei who was selected for the national team, all the other players have returned to the team.

Chongqing Contemporary Lifan Club did not announce the team's concentration time and next plans. Chongqing contemporary player Yuan Mincheng posted a photo of Korean players on social media on October 6 with the text: "I'm at work, I wish you all the best."

On the morning of October 7th, the Hebei China Fortune First Team finished a week-long holiday and gathered at the cattle base to prepare for the second stage of the Chinese Super League. The team will train for four days at the ox and camel base. Tomorrow there will be some passing and confrontation training, and there will also be strength training. Starting from the day after tomorrow, tactical drills will be conducted for the opponents in the second stage. Xie Feng also indicated that the opponents in the second stage are much stronger than those in the first stage, so the requirements for the players are also different in tactical play. Hebei China Fortune Land Development will depart for Suzhou on October 11. After four days of training in Suzhou, the team will usher in the first opponent of the second stage, Guangzhou Evergrande Taobao, on October 16.

Guangzhou R&F assembled at the R&F training base on October 5 and began preparations for the second stage of the competition. The two new foreign aids Adrian and Zivkovic followed the team for the first time in joint training. In order to ensure that the team can play safely and orderly in the second stage of the game, the club will arrange nucleic acid testing in the next few days. After everything is properly arranged, the team will go to Dalian again to start the game. The second stage of the journey.

On the afternoon of October 3, the entire Greenland Shenhua team after the National Day holiday was assembled at the Shenhua Kangqiao base for the first training after the holiday. In the next 10 days or so, Shenhua will prepare for the two rounds of Derby. The team plans to move into the Suzhou Division on October 12 to make final preparations for the game.

At 16:00 on October 3, all the coaches, players and staff of the Qingdao Huanghai Qinggang team ended the short National Day Mid-Autumn Festival holiday and regrouped to prepare for the second stage of the Chinese Super League that will kick off in the middle of this month.

After a five-day holiday, the team reunited on October 5. In the afternoon, I started the first practice of this fall. After a long absence from the training ground at home, I finally came back! Liu Chaoyang and Zhao Jianfei, who were on loan from Luneng, also joined the team.

At 4 o'clock in the afternoon on October 4, the first team of Shenzhen Kaisa finished their six-day holiday and returned to their base to prepare for the second stage of the Chinese Super League. On the first training day after the holiday, except for Jiang Zhipeng to participate in the national team training, other deep football players returned to the base for training. The amount of training arranged by the coach of the deep football team was moderate. In more than an hour, the players completed short passes, steals, group confrontations and other training content.

No one commented, but quiet

Not remembering Kobe in social media makes me questionable, he understands my love

Inter Milan continues to lead in victory, Milan is swept by 5 goals